HOW OUR INVESTIGATION REVEALED THE GENUINE OWNER OF A PROPERTY 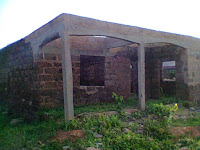 The said property is a six-room face-me-i-face-you(a.k.a passage house) on 50 by 100feet situated at Ugbighoko quarters, Benin City. At one time the news went round that it was marked up for sale. So certain agents started taking prospective buyers there.
Almost at the same time, it was reported that the property was not genuine especially as one elderly man, whom I call Andy, continued to hurl fire and brimstone against anyone going there. Hence, others concluded it was really not genuine.

In the midst of this chaos, we at Ogbes and Co. Property( a.ka. Property Pro), decided to dig into the matter. We visited Mr. Andy in his residence and sought to know the history of the property. It was then he opened up to us. He explained that he had built the house for his daughter-in-law(i.e wife of his son), Esohe. In fact, the document he showed us confirmed the truth. But we had another question. Was the property really for sale? Who was behind the plan to sell the property?

Well, the truth was not far-fetched.  From the story, we gathered that the owner of the property wanted to sell off her property, but this time, through her own father, Johnson. So it was obvious that Mr. Andy would be pushed aside with probably no hope of getting any financial reward. This was the source of his anger.  After so much family dispute over the issue, he grudgingly released the title document of the house , which had been in his possession, to Johnson, the father of the girl.

Although he had done that, he continued chasing people away from the property. Nevertheless, we assured him that he will get his own cut by the time transaction is successful, and he agreed. So armed with this information, we proceeded with the transaction since we were already having a client for the property. Therefore, we took the client to Mr. Johnson’s house. That same day we all left for the barrister’s office to write the Deed Of Transfer. Since Esohe, the owner of the property was abroad, the barrister decided to put a call through to her, and requested that she send Letter of Authority and photocopy of her International passport to him in other to give the transaction a legal backing. In the end, we closed the deal and smiled to the bank to collect our commission.

THE LESSON
1.       We carry out thorough investigation of property before marketing it
2.       We try as much as possible to settle family dispute over property
3.       We make sure that our clients get a feeling of satisfaction, and sleep peacefully after purchasing a property
Call 07031384722 for consultation. Please, drop your comment below.

When is the right time to buy property?
7 Ways to screen your tenant
4Bedroom Bungalow: its implication now and in the future
Posted by CHIDI at 18:44